Digital innovation is one of the critical drivers of success in enterprises. 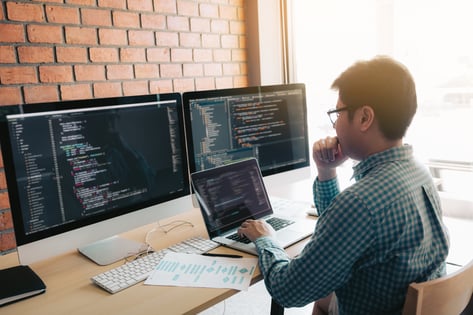 Although other factors remain relevant in improving operational excellence, being competitive in terms of technology is necessary for enterprises to stand out in the market today—a statement backed by the amount invested by companies today in tech.

In a B2B survey conducted by Walker Sands, 70% of respondents expect an increase in their tech budget. Furthermore, companies who are digital leaders in their industry generate five times more revenue compared to their less advanced peers, according to McKinsey.

Digital innovation is achieved in enterprises by continually improving their IT infrastructure, one of those being software changes. As business needs evolve, the applications used to cater to those needs must change as well.  However, enterprise software is vast and complex. Making an unintended mistake while implementing software changes can lead to unwanted consequences in an organization’s IT backbone, primarily if the root of the problem cannot be traced quickly.  What are the biggest mistakes enterprises do when making software changes, and how can they overcome them?

The cost of software change errors

Imagine a newly hired developer making a minor, unplanned change to an organization’s back-end servers. The developer, however, forgets to update the production database to reflect the change which then results in the server crashing. Fortunately, the organization has a backup procedure, so the company website was only down for a few minutes.

Although a few minutes may not seem much at first, it is unacceptable by modern standards. On average, downtime costs enterprises $5,600 a minute. If the outage in the above example lasted for 5 minutes, the organization would have lost a shocking $28,000 in less than 10 minutes!  This is just one of the many problems resulting from software change errors. Unplanned changes can also lead to security vulnerabilities, especially if the change is not tested before deployment. For example, a newly-added API in an organization’s customer-facing application may be vulnerable to data leaks, which are a lot more threatening than downtime.

Security breaches involving data leaks cost enterprises $3.92 million, that is only if the victim organization loses less than 5% of its customers after an attack. Vulnerabilities usually take 206 days to identify, so a risky software change will almost always cause damage before organizations can react.

In today’s economic landscape, where costs are rising, and budgets are tight, businesses cannot afford to lose any more money to server crashes and weak security due to faulty software changes. These mistakes must be avoided to maintain the financial health and operations of enterprises.

The 4 biggest mistakes enterprises do in making software changes

Many applications in enterprise systems rely heavily on APIs and inter-dependencies to get the job done. For instance, an accounting tool won’t work as well if it doesn’t connect directly with the organization’s database and payment system.  A common mistake when making software changes is to isolate applications instead of looking at the entire infrastructure. Since every resource is linked, one change may affect the functions of other applications negatively if developers do not analyze its impact on application dependencies in the environment.

To overcome this mistake, organizations need to assess what will happen to its IT infrastructure when a software change is planned. This means analyzing the dependencies between applications and identifying the issues that may arise if the change is implemented. Having a code dependency mapping (CDM) tool is an advantage as it visualizes dependencies and automatically analyzes the effects of software changes, making it easier for enterprise developers.

Not planning ahead of time

Like all business decisions, software changes should be planned ahead of time instead of being an overnight job. Rushed projects are never ideal in software development, especially in enterprises where workloads are significantly more extensive and more intricate. Not only is there a noticeable drop in quality, but businesses would also have to fork out a significant amount of money for overtime pay and rush fees to make up for the short delivery time.

Every software change must be planned and taken through multiple rounds of estimation before it’s even considered for deployment. Using a top-down approach is an excellent technique to understand what can happen if the change is made, as well as establishing realistic projections for the project.  Again, a CDM tool comes in handy as it allows enterprises to see the effects of a software change on its applications before it is implemented, which makes planning significantly more straightforward.

Organizations should not confuse themselves between risks and impacts. Software risk is a vulnerability in an application or IT asset that can lead to security breaches. Impacts, on the other hand, are the effects on the infrastructure if the risk-triggering event happens. For example, a production database vulnerable to SQL injection is a risk while attackers stealing sensitive information from the database is the impact.

Differentiating between the two is crucial as businesses may use the wrong method to assess software changes which leads to incorrect conclusions.  For instance, instead of doing a business impact analysis, an organization may incorrectly perform a risk assessment to identify the impact of a new payroll system going offline.  Not only is risk assessment the wrong technique to measure the impact, but it also gives the organization a false sense of security as the findings do not reflect the actual impact of such an event.

Failing to factor in the capabilities of team members

The effect on productivity in inexperienced development teams (image source)

Solving it requires an understanding of what your development team is capable of and building an environment for them to thrive in. This starts with hiring the right people, adopting the ideal software development methodology (e.g., Agile), and setting goals that are reasonable for both employees and your organization.

Avoiding mistakes in software changes comes from proper planning and accurately assessing the effects of a change before it is implemented, which can be easily accomplished with a comprehensive CDM tool like Panoptics.

With Panoptics, enterprises have an intuitive, complete view of their application architecture as well as the ability to observe every dependency between applications and database assets in detail. This feature allows enterprises to see how a proposed change will affect other applications and resources in the ecosystem to stop risky software changes from being implemented.

Panoptics works at the code level with an extensive list of languages (both compiled and interpreted) including Java, .NET, C/C++, and COBOL. This makes it a perfect fit for B2B enterprises in every industry.

Ready to be more confident in making essential software changes in your business?

Try Panoptics for free today to see how we can help your business ease digital innovation by avoiding risky software changes.